When Ragtrader spoke to Sara Caverley in 2018, she had just exited Sol Sana – the footwear business she founded in 2010.

At the time, Caverley hinted that a new footwear business that was in the works and was set to launch this year.

That business is Caverley Shoes.

Speaking to Ragtrader, Caverley details the process to launch the brand, how it's performing so far and what's on the cards for the business in 2020.

What’s happened between the last time we spoke and now?

I finished up with Sol Sana in October last year and essentially that same month was when I started going out and designing and creating the first collection for Caverley.

What I decided to do was to launch both in the US and Australia at the same time.

So that launch collection was winter for the US and spring for Australia and we delivered both of those collections a couple of months ago.

It was our first season and it was very exciting.

Fortunately I do have sales agents in the US and Australia who implemented the sales for us. Then it’s a matter of getting it produced, shipping it and all the logistics behind shipping and getting it to stores.

A lot of the processes – I had a huge team with Sol Sana so it wasn’t myself doing every little nitty gritty thing of the business – so I’ve essentially had to learn a lot of that from scratch with the launch of Caverley.

And it’s been – touch wood – it’s been surprisingly a pretty smooth transition into this new brand. We haven’t had any hiccups whatsoever, we’ve delivered on time, we’ve produced on time, our quality is amazing, so we’ve been pretty fortunate that there’s been no bumps in the road just yet.

What did you have to learn?

I should mention our online store as well, that we’ve had to learn from scratch. We’ve just recently launched our own eComm, so that’s in its very early days but that’s newly launched and we essentially had to learn how to do all that.

I’ve had some help on the way with developers but it’s been a learning curve.

So we’re wholesale at the moment so we sell to retailers like David Jones, The Iconic, Revolve and Urban Outfitters in America.

That was our first and foremost idea was to launch direct through wholesale because those are the channels that I know through my Sol Sana business.

Then we’ve got the direct-to-consumer as well, which as everyone knows, seems to be the avenue that I think is going to blossom the quickest.

So that element is all new – the direct-to-consumer through our own eComm. 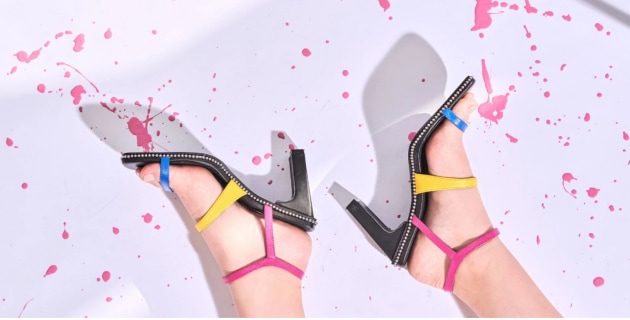 That’s been live for about two weeks now – so very fresh.

So we’ve got both a US and Australian website and it’s essentially just stock of our best-sellers that we sold in at wholesale.

It’s still quite limited. We haven’t gone too deep in terms of inventory and availability for our first season.

We wanted to keep it quite niche and exclusive to start with.

How has the collection been performing so far?

Again it’s very early on but we’ve had an amazing response at a retail level.

Selling at wholesale, we knew what our wholesale was because we’ve sold in and it performed really well, but once it gets to a retail level it’s pot-luck whether you have success selling through on the product.

But we’ve been really fortunate with one of our biggest US accounts Revolve, we’ve already got some re-orders and re-cuts placed by them which is an amazing start.

We’re a brand new brand, no-one’s ever heard of us in both markets, so it’s exciting to see that we’ve got that support already and we’re already getting re-orders.

What is the marketing strategy for the brand?

At this stage we just wanted to grow it organically, so it’s more of a word of mouth product.

In the US in 2020 we’ll be doing a similar concept where we’ll appoint a PR firm and go down that track and target celebrities and influencers in the States next year.

But again it’s word of mouth, we don’t pay anyone to wear our product and that’s always the way that I’ve wanted to conduct business.

So we’ll go out and gift product for free to influencers and celebrities that we feel are in line with the brand in the hopes that they’ll post or wear it, but it’s not something that we’re willing to pay for in this moment in time.

What has stood out as a highlight of the process so far?

I’m New York based at the moment and I think for me coming back to Australia – and I do come back quite regularly – I think the big thing for me was just walking through David Jones and just seeing my product – my blood, sweat and tears and everything’s that’s gone into getting this product on the floor – and it just looks really good.

I’m just really happy with how it all looks and how it all came together.

What is on the horizon for the brand?

For the next 12 months we are looking at more of an international expansion. So we will be opening up with an agency and distributors throughout the world – so that’s the next move for us.

[The expansion] will be into Canada, it’ll be parts of Asia and potentially Europe as well.

I did want to purposely do that quite quickly which is why I also launched in Australia and the US at the same time because I did want to get that global growth very early on.

So that’s a main target for us in 2020 is just to really grow through our wholesale channels.

And then we are going down and talking to influencers and celebrities and we’ll be putting more of a focus on that and more on the marketing end of things as well.