Over the seven weeks from mid-March to early May (14 March to 2 May), total payroll jobs fell by 7.3% the ABS reports.

Jobs in retail decreased 6% over the same period, compared to a 6.8% drop in the week ending April 18.

"The latest data shows a further slowing in the fall in COVID-19 job losses between mid-April and early May," ABS head of labour statistics Bjorn Jarvis said.

"The largest net job losses over the seven weeks of the COVID-19 period, in percentage terms, were in Victoria and New South Wales, where the falls in payroll jobs were around 8.4% and 7.7%.

"Payroll jobs worked by people under 20 continued to show the largest falls (-14.6%), and were particularly high in some states and territories, such as the Australian Capital Territory (-19.2%)," he said.

Jarvis added that the week to week changes have reduced as Australia works its way through the disruption.

"The week-to-week changes are much smaller than they were early in the COVID-19 period.

The data was released on May 19. 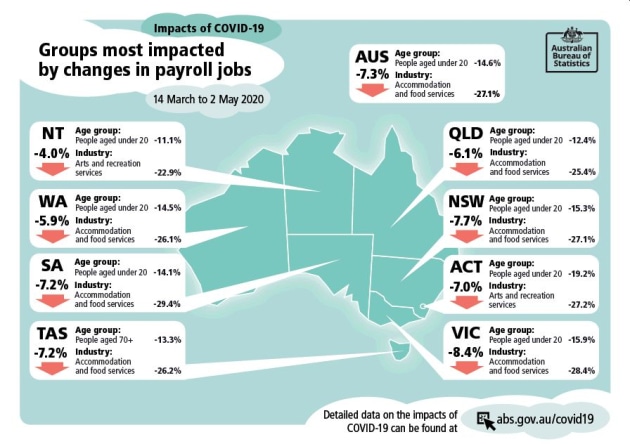