The JobKeeper payment will decrease today to $1200 per fortnight under the Federal Government's JobKeeper 2.0 plan.

These rates will be in place until 03 January 2021, when the rate will once again decrease. 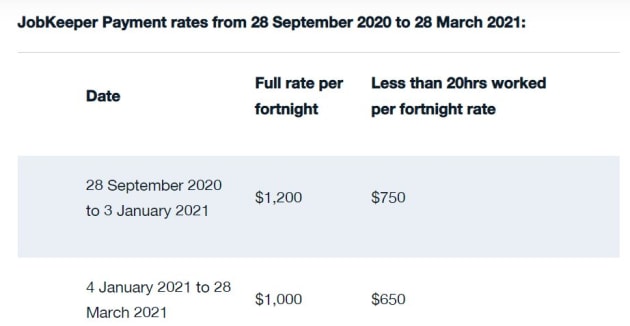 In order to be eligible for the payment going forward, businesses have to demonstrate that their actual turnovers have significantly declined in the previous quarter.

The government expects that around four million Australians will have benefitted from JobKeeper payments by the end of the September quarter.

This is then forecasted to fall to around 2.24 million employees in the December quarter and 1.75 million in the March 2021 quarter.

The decrease in JobKeeper support follows the Australian Bureau of Statistics latest labour force statistics which reported a fall in the unemployment rate to 6.8%.

This was driven by 111,000 people gaining employment between July and August as hours worked rose 0.1%.

The JobKeeper scheme is set to end in March 2021.