While international retail giants such as ASOS and Amazon still reign supreme (in the respective categories of Apparel and Accessories and Department Stores), the past 12 months has seen a resurgence of local brands.

Despite Amazon’s dominance in the Department store category, a number of prominent local brands have also emerged as leaders.

Target and Kmart have increased overall Search Share by a relative 21 per cent and 19 per cent respectively while Amazon’s search share decreased by a relative nine per cent over the same period year over year (week ending 26 April 2014 vs week ending 25 April 2015).

A similar trend is evident in the category of Apparel and Accessories where although ASOS remains the clear leader, local brands are fighting back.

The Iconic, Cotton On and Rebel Sport increased their total search share by an average of nine per cent over the past 12 months, while ASOS’s search share decreased from 6.06 per cent to 5.24 per cent (week ending 26 April 2014 vs week ending 25 April 2015).

The strong growth trajectory of these Australian brands reflects an increasing understanding of what customers want; from faster, more secure deliveries to a more enjoyable experience at every touch-point.

While international pure-play retailers have always had the customer experience front of mind, as Australian retailers become increasingly customer-centric, they are better equipped to compete.

We’re excited to see how things shape up in the coming months.

About: Every month, Experian Marketing Services reports on the digital behaviour of up to 1.5 million Australians. 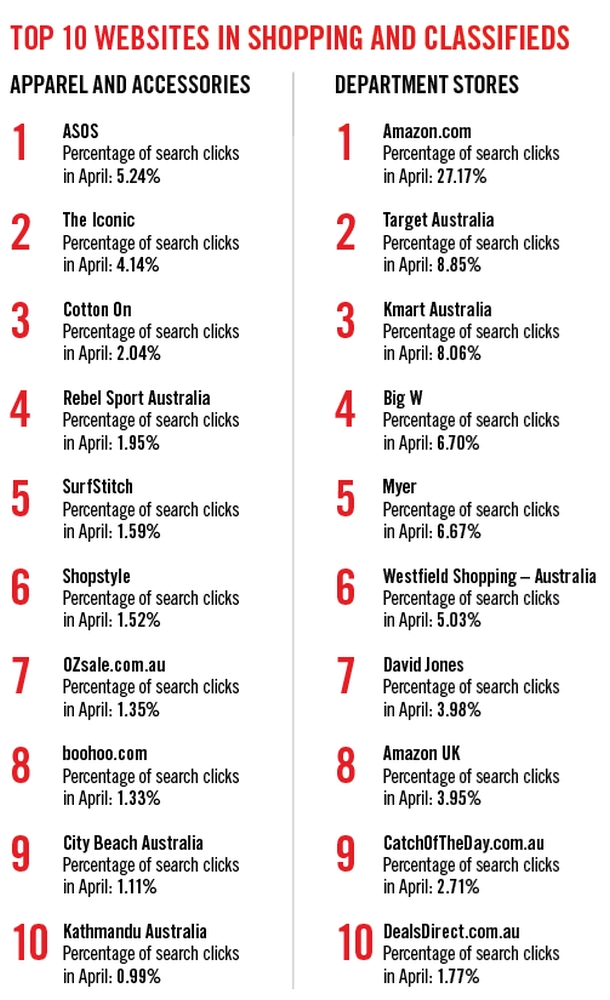