Influencer advertising soon could become a tricky space to navigate after a post by prominent fashion influencer Rozalia Russian was reported to the Ad Standards Community Panel.

The complainant claimed that Russian’s post of her holding a bottle of Tom Ford perfume captioned "summer in a bottle @tomfordbeauty" was "clearly paid/sponsored…over a period of time without acknowledgement to audience that it is sponsored," and that Russian had "no transparency and no regard to law."

In its determination of the post, the Ad Standards Community Panel found that Russian’s post was not clearly distinguishable as an advertisement and hence did breach Section 2.7 of the Code. 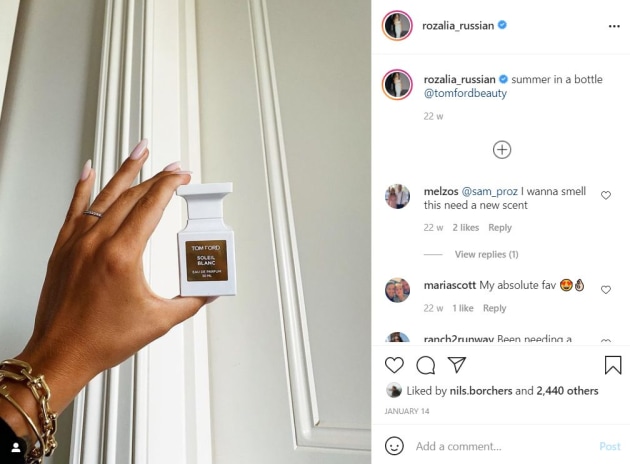 However, both Russian’s management LMB and Tom Ford Beauty have confirmed to Ragtrader that Russian’s post was not sponsored by the brand.

"We are currently working with Ad Standards Australia to resolve this matter," a spokesperson for Tom Ford Beauty said.

"We do not engage in paid influencer partnerships and the post in question was not sponsored."

Speaking on the case, an Ad Standards spokesperson told Ragtrader that the organisation is now working with Tom Ford International to resolve the matter.

"Following consumer complaints about the post which raised concerns about transparency, we contacted the advertiser, Tom Ford International, a number of times between 1 March to 21 April.

"We also contacted the influencer’s management team. Neither provided a response to Ad Standards.

"We then proceeded on the basis that Rozalia Russian is a well-known influencer who would be likely to post such material under an arrangement with the advertiser, and the Ad Standards Community Panel considered the complaint under Section 2.7 of the AANA Code of Ethics (distinguishable advertising).

"Ad Standards is currently working with the advertiser, which has now contacted us.

"The next steps will be considered based on the information the advertiser has now provided," the spokesperson said.